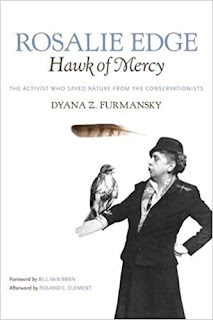 Summary (from Amazon): Rosalie Edge (1877-1962) was the first American woman to achieve national renown as a conservationist. Dyana Z. Furmansky draws on Edge’s personal papers and on interviews with family members and associates to portray an implacable, indomitable personality whose activism earned her the names “Joan of Arc” and “hellcat.” A progressive New York socialite and veteran suffragist, Edge did not join the conservation movement until her early fifties. Nonetheless, her legacy of achievements―called "widespread and monumental" by the New Yorker―forms a crucial link between the eras defined by John Muir and Rachel Carson. An early voice against the indiscriminate use of toxins and pesticides, Edge reported evidence about the dangers of DDT fourteen years before Carson's Silent Spring was published.

Today, Edge is most widely remembered for establishing Hawk Mountain Sanctuary, the world's first refuge for birds of prey. Founded in 1934 and located in eastern Pennsylvania, Hawk Mountain was cited in Silent Spring as an "especially significant" source of data. In 1930, Edge formed the militant Emergency Conservation Committee, which not only railed against the complacency of the Bureau of Biological Survey, Audubon Society, U.S. Forest Service, and other stewardship organizations but also exposed the complicity of some in the squandering of our natural heritage. Edge played key roles in the establishment of Olympic and Kings Canyon National Parks and the expansion of Yosemite and Sequoia National Parks. Filled with new insights into a tumultuous period in American conservation, this is the life story of an unforgettable individual whose work influenced the first generation of environmentalists, including the founders of the Wilderness Society, Nature Conservancy, and Environmental Defense Fund. 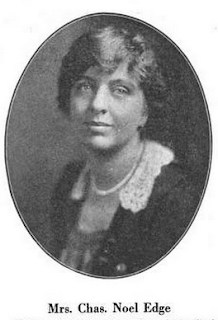 Videos and Interviews with Author: 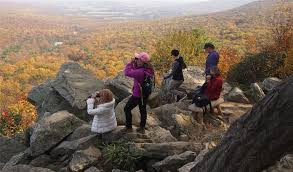 1.  Discuss who Edge was and how she became a "citizen-scientist and militant political agitator".  What events influenced and "awakened"her?  Discuss her travels, writings, involvement with the suffragette movement, social life, marriage, children, etc.

2.  Discuss the origins and evolution of The National Association of Audubon Societies (NAAS) organization, "the nation's oldest, largest, wealthiest and most prestigious bird protection organization", including its early leaders such as Grinnell, Chapman, and Pearson.  Discuss NAAS' relationship with the AOU (American Ornithological Society), the American Museum of Natural History and Bureau of Biological Survey as well as the Winchester Arms Co. and the Vermilion Bay Hunt Club and the conflicts that ensured.  (p. 98-)

4.  In 1929, Edge received a package in Paris containing the pamphlet, "A Crisis in Conservation".  Discuss why it was written, what event provoked it to be written and who were the writers.  What impact did it have on Edge?  (p.88-, 106-)

5.  Discuss Edge's relationship and interactions with the NAAS Board including her writings and the various people she worked with including Hornaday, Van Name and Brant and even Peterson and how it led to her founding the ECC (Emergency Conservation Committee).  (p. 110-, 118-, 124)

6.  Why does Edge hire the cofounder and director of the ACLU, Roger Baldwin, to represent her in a lawsuit against the NAAS?  What is the result and impact?  (126-) Discuss further major events that she fought against including the Rentals of Sanctuary in the NAAS budget, (p. 138), Yellowstone's pelicans (p. 141), fur trapping, Bear Refuge (p. 140), and King's Canyon (p. 228-), etc.

7.  The term ecosystem was not readily used in the early 1900s but Edge evokes this concept at NAAS meetings and congressional hearings.  (p. 143-) What impact and vision did it provide?

8.  Edge kept her activist and social lives separate.  At the Colony Club though, she was once asked, "What do you do when you look at a bird?"  (p. 150)  How would you respond?

10.  What impact did Edge have on the conservation movement as a whole and which organizations and individuals continued the fight, who were inspired by her? 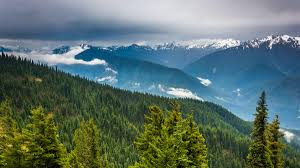 Posted by The Nature Lover's Book Club at 12:50 PM

The Nature Lover's Book Club
The Bucks County Audubon Society at the Honey Hollow Environmental Education Center welcomes you to join us at the Doylestown Bookshop for a fun and engaging discussion about all things nature. We will be meeting the 4th Thursday evening of the month, starting at 6:15 p.m. We welcome your insights and input for future readings. Bring a friend and make a new one and we look forward to seeing you at the next meeting.

View my complete profile
Subscribe below!
Buy the selected book of the month at the
Doylestown Bookshop
and receive 20% off!
Be sure to mention you are joining the
Nature Lover's Book Club!
Visit their site: http://www.doylestownbookshop.com
See you soon!

Let us know if you plan to attend by signing up on our Meetup site. Click on Meetup below!